Cheers to the End of the World

“i don’t pay attention to the
world ending.
it has ended for me
many times
and began again in the morning.”

I have spent a probably unusual amount of time thinking about the end of the world. One of my earliest memories is of being in first grade, my mom picked me up before bedtime. I felt my skinny gangly legs fall farther down to the floor than ever before. I was draped over her shoulder, but already my still-small body was getting awkwardly big in her arms. I thought it’s happening. Soon, she won’t be able to pick me up anymore. I looked around at the beige kitchen, covered in darkness. This kitchen will soon be a memory, my mind frantically raced as it tried to remember every detail. I saw sand flowing through my little fingers, time is moving quickly – I remember thinking, the end is just around the corner. For my mom, for me, for us all.

Sure maybe not all seven-year olds who grew up in an uber conservative baptist church experienced an acute existential crisis before all their baby teeth had even fallen out – but that’s my fun little story.

As the child of a church deacon and Sunday school teacher, I was in church all day on Sundays (I’m talking early morning well into the evening for both services) and on Wednesday nights to boot (Wednesdays, as we all know, should be saved for eating spaghetti at home not putting on white tights to head to church).

The constant narrative I was indoctrinated with was an ever watchful angry god and your eternal resting place was his top concern. This god only had to care about you because of Jesus’s sacrifice – made for the lowlives, us humans. And if you didn’t say the magic prayer, hell’s fire awaited you after your last breath. God was always watching to judge whether you were really saved or not. Don’t have too much fun! What if you’re at the club during the Rapture? You’ll get left behind!

Ah, the Rapture. The pastor dedicated a few Wednesdays to the Left Behind series as soon as it was available on VHS. They wheeled out the tv – I was so excited to watch tv in church that I didn’t care that we had to watch Kirk Cameron try to act. Left Behind offered an answer to so many of my pressing questions – a perfect illustration of the end times.

The Anti Christ was a Gavin Newsom lookin’ sleazebag who loved the UN. And that was bad for some reason. Evangelicals really hate the UN in case you didn’t know.  Kirk Cameron, a pastor (who wasn’t a true believer!!), and a pilot all realized that they were wrong about God not existing so they tried to make it through the end times together. Okay so this is where it gets dicey – not only plotwise, but theologically. Folks that believe in the Rapture (which wasn’t developed until the 17th century mind you, relatively recent in light of the expanse of Christian history) veer in several ways – one of the ways are the “waves” of the Rapture. Can someone be saved even after the Rapture? Left Behind argues yes (hence why this motley crue converted even after getting their asses left), some even more conservative folks say no, everyone straight to hell. Either way, in my pre-teen brain the Rapture was not only real, it was something I had to be actively very concerned about. And with Y2k coming?! Phew! The arrival of the new year and new millennium were filled with conspiracies about the imminent end of the world.

Well into middle school, I used to sneak into my parents room to see if my mom was still there. If I saw her shape under the covers, I knew that I was safe – I wasn’t left behind. It wasn’t until years of theological study that I finally had my anxieties assuaged around the Rapture – a fringe American doctrine that holds no biblical or historical weight, an interpretation designed by white men to protect whiteness and its capital.

I learned that an apocalypse (which, by the way, is what the book of Revelation is called in Spanish) is an unveiling. A destruction of things as they were, a new vision of things as they are. It is Dorothy pulling back the curtain. It is Paul’s scales falling from his eyes. It is the confrontation with the end, it is the invitation to see what is being created in a new way.

Often worlds end without our permission – those that have experienced war and the devastating effects of colonization know this well.

These unveilings are an apocalypse of our own design  – ending or shifting relationships, identities, whole communities. Like each time I left a church because their gods weren’t big enough for me. Like each time I said no to someone in order to wholeheartedly say yes to myself. Sometimes you have to choose to end these worlds because you just have to build a better one for yourself. This is what continues to compel me to the story of Jesus – this God is one of resurrection. And what I know through resurrection stories is that as often as the world ends – it always begins again.

As we settle into this new year, may we hold onto courage in the face of the end(s) of the world. May we recognize the bursting possibilities around us, perceiving the Divine in us with new clarity this year. And may we have emboldened, creative hope to build anew, for ourselves and for each other. 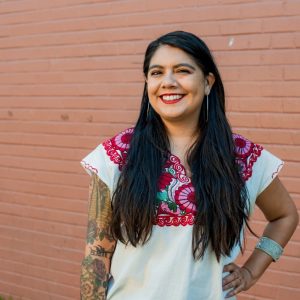 elba morales is a proud child of immigrants from Mexico and El Salvador. They hold a BA in Biblical Studies from Patten University (Oakland, CA) and a MA in Systemic and Philosophical Theology from the Graduate Theological Union (Berkeley, CA). Their research focused on the intersection between theology, race, gender, and sexuality.

elba was raised and lives in Oakland, CA. They live with her wonderful partner and dog. elba enjoys cooking, reading comics, hitting up queer dance parties, and spending time with their niblings.

← Postures and practices for the year to come home: month 1 →