Recently, in announcing a summer sabbatical for her team, Brené Brown referenced a quote from British actress, director, and screenwriter Michaela Coel that says, “Do not be afraid to disappear, from it, from us, for a while, and see what comes to you in the silence.”

When the pandemic began, my world got very small.

I moved into the detached guest suite over my brother’s garage for the first 4 or 5 weeks of “lockdown.” At the time, we didn’t know if South Carolina would issue a full stay-at-home order and if they did, I didn’t want to be totally alone (my then-boyfriend was a hospital worker and very busy), and both my brother and sister-in-law had to keep working, so I became an additional adult to watch the kids as school closures stretched into weeks.

Like most of the world, travel plans I’d had were canceled, and in my own city, alongside restaurants and nonessential stores, even the beaches and parks were closed for public safety. There was nowhere to go.

I spent hours every day in those early weeks walking around my brother’s neighborhood. I learned the curve of every street. I became acquainted with the variety of wildlife that frequented the marsh that surrounded us. I familiarized myself with the pattern of the tides.

While at first, my schedule was full of virtual happy hours and zoom calls with the friends I had spread out across the country and the world, in time those dwindled. My energy for it diminished. With few exceptions, my community became that of my family and my neighbors. When I did venture out, it was to support businesses close to home.

Since then, for better or worse, the world has begun to reopen. Some bizarre semblance of “before” has resumed though, of course, everything is different and COVID rages on. My world has reopened too, physically and virtually. It was slow at first, but it feels like a flood these days. A cacophony of mostly heartache and hardship, all the old fires and new ones too. Even the joy overwhelms.

I find myself drowning sometimes, with so much to care about, fight for, hold onto, speak up about, prioritize. It was always hard, but the scope feels less familiar now. And I feel a longing for the shrunken, small world days.

I feel some guilt about this. There are so many people in the world who are struggling, hurting, dying. There are so many things going wrong, so many fires to fight. How can I abandon a single cause? A single person? How selfish is it to choose a circumference that encompasses any less than the universe?

But what I found when my world shrunk was that my capacity to care grew. Not just for what was within my grasp, but also for what I allowed to be beyond it. In grasping what was at my fingertips, I felt focus and in that focus, I felt the connection to all other things.

In Emergent Strategy, Adrienne Marie Brown says, “What we practice at the small scale sets the pattern for the whole system.”

And so I find it is for myself now. My shrunken world is full with my soon-to-be child reminding me that everyone everywhere came first from someone somewhere. Full with my aging cat and my young dog and their daily reminders of the gifts of gentle, quiet presence and dependence and found community. The marsh beyond my street, the live oaks beyond my fence, the pluff mud and salt in the air, and even the weeds that stubbornly resurrect in our yard remind me that life is growing everywhere in a thousand different ways and it is all worth tending, all deserving of tenderness.

There is something, I think, to retreat. At times. In returning to the root.

Here in the quiet closeness of my own circumference, I find more than enough immediately in my grasp to do and notice, and remarkably infinite reminders of all that matters and how, and enough beauty in the small scope to sustain me for the long and wider work. 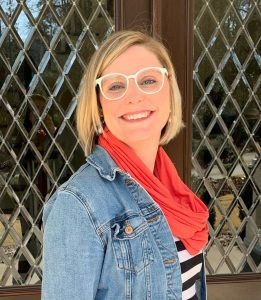 Layton E. Williams (she/her) is a Presbyterian Church (USA) minister and a writer based in Charleston, SC. She is the author of Holy Disunity: How What Separates Us Can Save Us. She received her M.Div from Austin Presbyterian Theological Seminary and previously served on staff at NEXT Church, Sojourners in D.C. and Fourth Presbyterian Church in Chicago. Layton works at the intersection of communications, digital engagement, ministry, and advocacy.

← The simple (but not easy) things Why 'enfleshed' →