To spring, to rise, to move-again

On the first day of Spring, I walked down the block to thank the crocus, sprung from the thawing soil the week before. Little patches of purple, emerging from melting snow and decaying leaves. Color returning to the greyscale of Iowa’s winter palette. Day and night, dark and light–rebalancing, and finding new alignment. Lent comes from lengthen, the lenten season marked by lengthening days. In the 1300s, lent was often called springing time, the season when plants and all sorts of lifeforms, dormant over the fall and winter, begin to grow again, springing from the earth. To spring, to rise, to move again–thawing and finding flow, getting sprung from that which constrains.

In places where the ground freezes in winter and thaws in spring, mud has its own season. Water cannot percolate into the frozen depths, so the surface layers of soil become saturated, and turn to mud. In Ukraine, there are Russian tanks that have gotten stuck in the mud, unable to advance. A tiny resistance, the earth enacting a blessed refusal.

On the verge of the Buddha’s enlightenment, he touched the ground and asked earth to bear witness to his awakening. It is said that flowers sprang up where his hand touched the dirt.

My two year old nibbling loves dirt–for a while anything and everything he deemed good and delightful he called either “dirt” or “cookies.” Horses munching on hay were eating cookies. Asked what kind of cookie he wanted, he proclaimed, “dirt!” I tried to interview Oliver, asking why he loves dirt. He wasn’t much interested in our interview–the why and the what for–he just wanted to play. I started telling him how I love dirt because it grows things and he interrupted me to take my hand in his so we could run and explore and exclaim together our attention to interesting, beautiful, surprising things, which he so gorgeously finds everywhere he goes. I’m still aligning my mind with his wisdom, shared.

“I have become outrageously sacramental,” writes ecofeminist theologian Sallie McFague. “I feel comfortable with language about God that is maternal, immanent, spirit-laden, oceanic, all-embracing. I feel as if I live within the divine milieu and can worship God in the intricacies, specialness, and particularity of each thing. I am not even afraid of pantheism; the line between God and the world is fuzzy.” God and world, inseparable, embracing. Divinity dispersed through the world, the aliveness of sacred Lifeforce incarnating the flesh of the world. Divinity. Dirt.

This year, I entered Lent by hauling the potted plants outside, and putting my hands in the dirt. Repotting and tending, clearing death and making space so new life can spill over. Jade and aloe and the baby avocado tree started from a pit at the beginning of the pandemic, and a stunning tandradescantia zebrina gifted to me by a student. I felt such tenderness toward the exposed roots, the deep vulnerabilities of being mortal, alive. This Lent, I have been practicing tenderness with my own exposed roots, confronting my tendency to be harsh with my own vulnerability. Giving up shame, uprooting my instinct to inflict expectations on myself that stifle aliveness.

Dirt. Mud. Ash. Earth. Adamah, ground, the material, elemental stuff of creation and creativity. We are of earth and stars and sunlight and spring rain and ocean depths and galactic goodness. We are mere dust. We are magical stardust. Life and death and decay and emergence, entangled. Getting stuck and springing forth, each nurturing something of precious aliveness.

We humans, brought forth from humus; humility is our primordial lesson of mortal aliveness. Robin Wall Kimmerer talks about the overlooked virtue of humility. Unlearning mastery by embracing curiosity, and learning from the intelligences other than our own. We as a species can’t figure everything out, she insists. But we can learn from the living world, accept the offerings of their knowing, and being. Trees reaching for each other underground. Asters and goldenrod growing together, their beauty complementing each other, companioning each other into vibrancy.

“What’s growing in your garden?” a beloved friend asked this week, forgetting that his northern California climate isn’t that of Iowa, where snow had only days before melted into the earth, becoming mud. “Nothing yet!” I exclaimed. Then, pause, pause. “Well, that’s not quite true…” and I told him about my first attempt at planting garlic bulbs in the fall, and seeing tender shoots springing up just this week. And the parsley that has been sending forth fresh green leaves, surprising me when I expected only frozen, dead remains. And the iris, a collection of bulbs gifted from friends, a neighbor up the block, and my aunt–tentative arms reaching up in quiet hallelujahs. And how the first red nubs of rhubarb winked at me, a flirtatious invitation, springing forth… 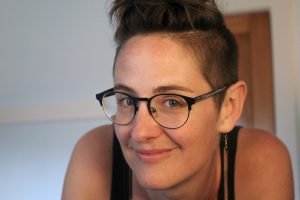 Anna Blaedel (they/them) is cofounder and theologian-in-residence at enfleshed, where they tend to the theopoetic intersections of spiritual, academic, and activist engagement. Anna chaplains University of Iowa students, and is a doctoral candidate in Theological and Philosophical Studies at Drew University’s Graduate Division on Religion. Waking before dawn, lingering in poetry, being an aunt, retreating to the woods or their basement woodshop, tending the garden, sharing silence, and feeding people delicious food are some of Anna’s favorite things.

← Why are you pouring from your own cup? Can we just slow down? →